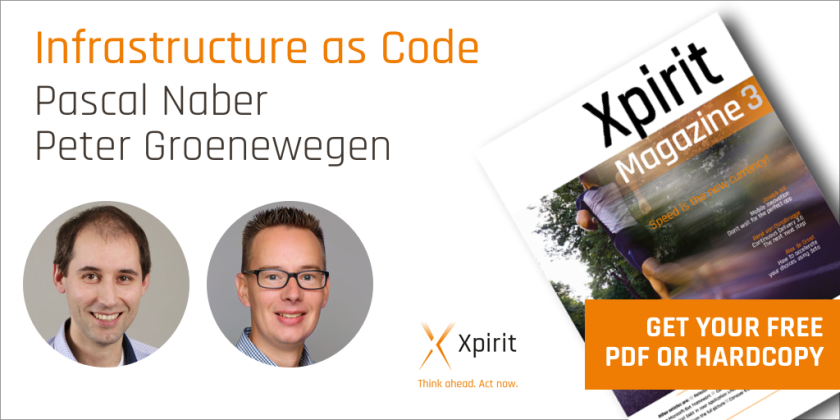 The infrastructure for the DTAP environment was partially created by hand and partly by using seven PowerShell scripts. The order in which the scripts are executed is important and there is only one IT-Pro with the required knowledge. Those PowerShell scripts are distributed over multiple people and are partly saved on local machines. The other part of the script is stored on a network share so every IT-pro can access it. In the course of time, many different versions of the PowerShell scripts are created because it depends on the person who wants to execute it and the project it is executed for.

The configuration of the environment is also done by hand.

This process creates the following problems:

As you can see, the creation of infrastructure is an error-prone and risky operation that needs to change in order to deliver high quality, reproducible infrastructure.

Single source of truth
The infrastructure declaration files are placed in a source control repository. This is the single source of truth. All team members can see and work on the files and start their own version of the infrastructure. They can test it, and then commit changes to source control. All changes are under version control and can be linked to work items. The source control repository gives insight into what is changing and by whom.
The link to the work item can tell you why it was changed. It’s also clear what the latest version of the file is. Team members can easily work together on the same file.

Increase repeatability and testability
When a change to source control is pushed, this initiates a build that can test the change and after that publish an artifact. That will trigger a release, which deploys your infrastructure. Infrastructure as Code makes your process repeatable and testable. After deploying your infrastructure, you can run standard tests to see if the deployment is correct. Changes can be deployed and tested in a DTAP pipeline.
This makes your process of deploying infrastructure reliable, and when you redeploy, you will get the same environment time after time.

Decrease provisioning time
Everything is automated to create the infrastructure. This results in short provisioning times. In many cases a deployment to a cloud environment has a lead time of 5 to 10 minutes, compared to a deployment time of days, weeks or even months.
This is accomplished by skipping manual tasks and waiting time in combination with high-quality, proven templates. The automation creates an environment that should not be touched by hand. It handles your servers like cattle instead of pets*. In case of problems there is no need to logon to infrastructure to see what is going wrong and trying to find the problem and fix it. Just delete the environment and redeploy the infrastructure to get the original working version.

Rely less on availability of persons to perform tasks
In our team, everybody can change and deploy the infrastructure. This removes the dependency on a separate operations team. By having a shared responsibility, the whole team cares and is able to optimize the infrastructure for the application.

Creating an Infrastructure as Code pipeline with VSTS
There are many tools you can use to create an Infrastructure as Code pipeline. In this sample we will show you how to create a pipeline which deploys an ARM template with a Visual Studio Team Service (VSTS) build and release pipeline. The ARM Template will be placed in a Git repository in VSTS. When you change the template, a build is triggered, and the build will publish the ARM template as an artifact. Subsequently, the release will deploy or apply the template to an Azure Resource group.

Prerequisite
To start building Infrastructure as Code with VSTS you need a VSTS account. If you don’t have a VSTS account, you can create one at https://www.visualstudio.com. This is free for up to 5 users. Within the VSTS Account you create, you then create a new project with a Git repository. The next step is to get some infrastructure definition pushed to the repository.

It is possible to create ARM templates yourself by choosing the project type Cloud → Azure Resource Group in Visual Studio. The community has already created a lot of templates that you can reuse or take as a good starting point. The community ARM templates can be found on the Azure Quickstart Templates. ARM templates are supported on Azure and also on-premise with Microsoft Azure Stack.

In our example, we want to deploy a Web App with a SQL Server database. The files for this configuration are called 201-web-appsql-database. Download the ARM template and parameter files and push them in your Git source control repository in your VSTS project.

VSTS Build
Now you are ready to create the build. Navigate to the build tab in VSTS and add a new build. Use your Git repository as the source. Make sure you have Continuous Integration turned on. This will start the build when code is pushed into the Git repository. As a minimum, the build has to publish your files to an artifact called drop. To do this, add a Copy, Publish Artifact step to your build and configure it like this:

VSTS Release
The next step is to use a VSTS Release for deploying your infrastructure to Azure. To do so, you navigate to release and add a new Release. Rename the first environment to Development and add the task Azure Resource Group Deployment to the Development environment. This task can deploy your ARM template to an Azure Resource group. To configure your task, you need to add an ARM Service Endpoint to VSTS. You can read how doing this in the following blogpost: http://xpir.it/mg3-iac4. Now you can fill in the remaining information, i.e.  the name of the ARM template and the name of the parameters file (fig. 6):

The deployment can be changed to meet your wishes. For example, deploy to a separate Resource group in Azure per DTAP environment. Now you have your first version of an Infrastructure as Code deployment pipeline. The pipeline can be extended in multiple ways. The build can be extended with tests to make sure the infrastructure is configured as it is supposed to be. The release can be extended by adding approvers, which makes sure that an environment will only be deployed after an approval of one or more persons.

When you apply Infrastructure as Code, everything should be automated, which will save a lot of time, manual configuration and errors. All configurations are the same, and there are no more surprises when you release your application to production. All changes in the infrastructure are accessible in source control.

Source control gives great insight into why and what is changing and by whom. A DevOps team that applies Infrastructure as Code is self-contained in running its application. The team is responsible for all aspects of the environment they are using. All team members have the same power and responsibilities in keeping everything up and running, and everybody is able to quickly fix, test and deploy changes.

This article was published in the Xpirit Magazine #3, get your soft or hard copy here.

This site uses Akismet to reduce spam. Learn how your comment data is processed.